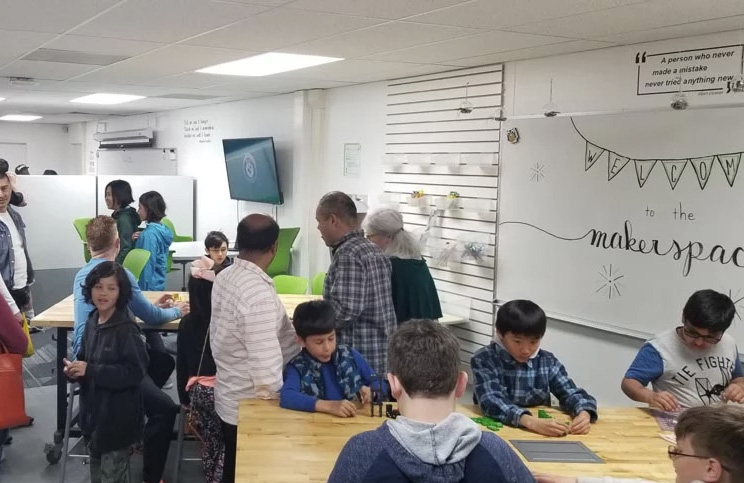 Willett Elementary opened a new “makerspace” Thursday as part of a schoolwide open house. It’s a place where students and like-minded classmates can meet to work on creative projects in a setting with a variety of materials and resources … intended to encourage students to learn by doing.

Associate Superintendent Rody Boonchouy said the makerspace is intended to reinforce the goals emphasized in the school district’s graduate profile, adopted about a year ago. The graduate profile identifies skills that students are expected to develop before they complete high school … things like critical thinking, problem solving, adaptability, resilience, collaboration, communication, creativity, and civic/cultural awareness.

Boonchouy and Willett principal Heidi Perry brainstormed about how they could create a place on campus that would “support students developing those skills… what would such a space look like?”

“It’s basically a place dedicated to tinkering, building, and inventing… and occasionally making mistakes and failing, by providing a hands-on opportunity to demonstrate their learning in creative ways,” Boonchouy explained.

The makerspace has different sized pieces of wood, various fabrics, and simple tools, as well as colored dominoes for building towers and other creations. And of course there are a few computers as well. In the future, sewing machines, 3-D printers, laser printers, and other items will likely be added.

Much as high school students during the 1970s, before the advent of personal computers and the internet, now work at tech companies creating hardware and software products, now widely used, that were not yet imagined during their high school years, Willett’s makerspace is similarly oriented toward developing skills that will benefit today’s students in decades to come.

Perry said “a makerspace is a place where young people have an opportunity to explore their own interests; learn to use tools and materials, both physical and virtual; and develop creative projects. The jobs, interests and technology that our students will experience (later) in their lifetimes are things that we cannot even imagine right now. Our hope is to prepare and inspire our students towards what has not even been created yet.”

Willett students and their parents packed the new makerspace last Thursday evening, checking out the gear. Sixth grader Felix Fuglei said, “I’m really excited people can come in with their friends during recess or lunch and create something using tools that might not be accessible at home.”

Another sixth grader, Tom Koenig, said the new makerspace is “really cool, a space for everyone in school to access space to make things.” Koenig is interested in making model airplanes.

Fourth grader Sara Ochsner-Hembrow said she is looking forward to creating “something made of wood.”

Parent Eva King, who has a daughter in a fourth grade class at Willett, said the new room is “exciting — our daughter will have the next two years to explore” and develop her talents.

Veteran teacher Marla Cook said the new makerspace “is going to get a lot of use. Every school needs to have one of these. Some kids learn better this way.”

Principal Perry thanked a variety of people who helped create the new makerspace and envisioned this space, including Aaron Buehring, a local high school graduate and UCD alum, who now works for the Lionakis Design Firm. Buehring designed the room, the furniture and the vision for the makerspace, and worked with the various vendors to procure donations of furniture and flooring. Furniture was donated by Cristel Hutchinson of Haskell Furniture, and flooring was donated and installed by Interface Flooring, under the direction of Gwen Lauridson.

Chris Fluetsch, Willett’s teacher-librarian, and students Felix Fuglei and Tom Koenig worked with the team to create the student vision for this room. Fluetsch and Cook run Willett’s Robotics Club after school and were able to get a donation of $20,000 from the Davis Robotics Foundation, which has helped create this space. Beau Runyan from Da Vinci High School has worked with his students to create a video of the process they went through to create the room.Kelly Wilkerson from Davis High School and her graphic design students have created three graphic designs for the room.